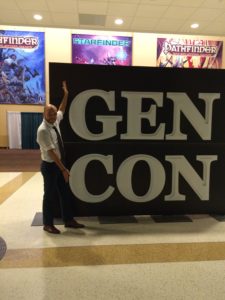 Welcome to the Show!

Yes, it is the beginning of the end of Summer 2016 but don’t let that get you down! There’s so much to discuss and enjoy yet!

GenCon 2016 in beautifully accessible Indianapolis Indiana was a blast, again, this year. If you weren’t able to make it out to the gaming mecca, 65,000 gamers descending upon the original and now oldest gaming convention on the planet, then hopefully this recap will give you a sense of what it was like. 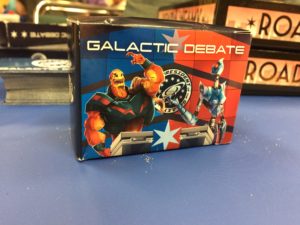 Improv wackiness meets persuading your friends to go along with weird stuff!

As many of you know, collaborative story telling games are such a favorite of ours here at the Beard that we started a whole podcast dedicated to them!

Trying out new and not yet released games is one of the best things to do at GenCon. Regardless if one likes the game or not, simply having the chance to experience it can be rewarding and doubly so if one really likes the game.

Imagine our joy as Galactic Debate fell into our laps! This game, by Road to Infamy Games is an interesting meshing of collaborative and competitive. Each player takes on the role of a world leader representing their planet in a Galactic Federation and must debate other leaders on the pros and cons of “important issues” facing the galaxy while those players who are not debating vote on the winner.

The galaxy at large is a blank slate until players begin world building through their arguments: for each side’s argument become canon. Want to say the Monstrous Bug People are like locusts who eat everything on each planet they inhabit? Fine, it’s canon. Want to say the Sentient Whale People use expendable crew members as an alternative energy resource? Make it so, for the rest of the game.

This mechanic allows for collaborative world building while pitting players against one another as they attempt to pander to the other leaders who will ultimately decide if they win that specific debate.

By the end of the game, the player with the most leaders having favored their positions wins!

We saw so many other great board games too! Get ready to get infamous! The other star of the show was, by far, Mad Science Foundation by Cryptozotic which is a really fun game in which everyone plays mad scientists trying to complete crazy inventions so as to gain the most infamy. For what mad scientist *doesn’t* want to be infamous?! Great strategy here as well. Players can attempt to create inventions that self perpetuate their plans or simply stock pile tons of resources. One of my favorite aspects of the demo was the Sassy Robot… so sassy!!! In full disclosure, one of the designers is a friend of us here at the Beard and we couldn’t be happier for him. Yay Sharang! Congrats on such a great game and looking so great in a lab coat (tough to pull off)! Tyrants of the Underdark by Wizards of the Coast was the board game we were most anticipating after New York Toy Fair 2016. We thought this would be in the vein of the venerable Lords of Waterdeep board game and while collecting the most victory points is definitely the win condition, how one goes about collecting those points is vastly different than LoW. 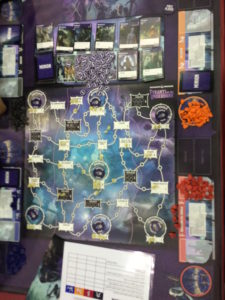 Before the Tyranny kicks into full gear

In Tyrants of the Underdark players take on the roles of one of four vile Drow noble houses and attempt to spread their presence throughout the vast gloom of the Underdark. By using influence to purchase cards a player builds their deck of creatures and servants who forward the goal of conquering as much of the board as possible. By using power a player places troops and spies on the board to spread their presence far and wide. The best example we could think of for this game is a mash up of Risk and Dominion. Players do not roll dice against each other and instead use power to remove troops of opposing houses. The best part about this game is how quickly it goes! Seriously, four new players were able to complete the game in 90 minutes. That’s a perfect length! Here at the Beard we highly recommend Tyrants of the Underdark. 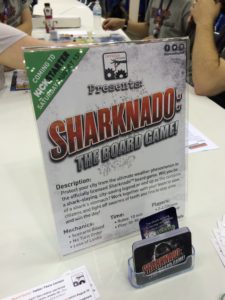 Ticket to Ride: Rails and Sails

We tried a number of other games though none of them really jumped out as big winners. Sharknado the Board Game seems very gimmicky (duh) where as the new Ticket to Ride: Rails & Sails by Days of Wonder was a interesting new take on the newly minted classic. The board was beautiful and the new mechanics were interesting. Road to Infamy was the other product that Road to Infamy Games has put out and it is a bidding game focused on getting the most points but nothing to write home about.

Y’know what we *do* write home about here Berlings Beard? Costumes. That’s right, we love cos-play. We love the effort and dedication folks put into their outfits! We love that fans love their chosen nerdery so dang much that they gotta express it loud and proud! Here are a smattering of some of the ones we liked the best. 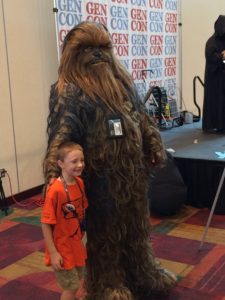 There were some video games at GenCon too, but nothing new or huge like at PAX East. Still, Pokemon-Go fever has definitely swept the nation. A highlight of GenCon is their truly cavernous Vendor’s Hall. Seriously, this place must have odes, sonnets, and laments written for it as it is so expansive, beautiful, chaotic, and ultimately amazing as one realizes this must be what the Nerd version of the best mall you’ve ever been to must be like. So many great products, lots of free game demos, a veritable kaleidoscope of visual pleasure, and you might just run into a famous game designer / personality on the floor at any moment! It’s so easy to spend all one’s hard earned ducats here though, so always be discerning. In full disclosure, we may have bought some pirate pants from a leather merchant. Such a colorful and expansive show floor! 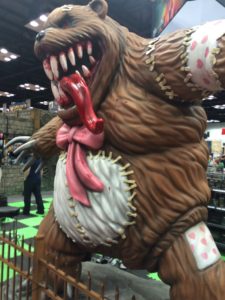 GenCon 2016 was one of the best Cons ever. Indianapolis is very accommodating and welcoming. The ‘beer garden’ this year had a specific brew created for GenCon itself (the Rye, it was alright). While there were over 60,000 people in the downtown area, it never felt too crowded (outside the convention center) and the weather was just beautiful. We cannot recommend enough that every table top gamer out there make the trip to experience this transformational event at least once!