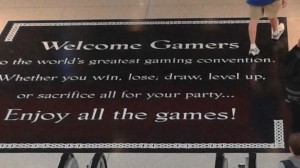 This greeted us at the airport!

Welcome back once again, dear readers!

With those numbers in mind, you might understand how the only word that can accurately describe my first Gen Con experience in over a decade is overwhelming. Holy frijoles, there was just too much to see, too much to do, too much to compute, and way too few hours in which to enjoy it all. Thus, I can only but give you my tiny slice of the overall experience that is Gen Con. Enjoy! 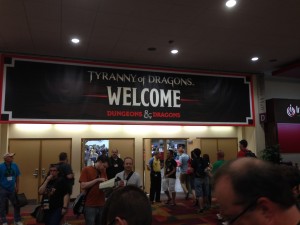 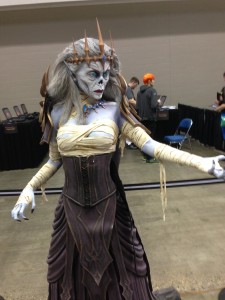 Hall D was the place to be, for organized play D&D, over the weekend. A faux 10’ castle wall, with archway entrance and all, corralled the massive area dedicated to the launch of Dungeon and Dragons 5th Edtion. There was also two smaller areas sectioned off for a merch booth, the ‘Bazaar’, packed to the gills with t-shirts, minis, and other products as well as a few rigs set up to demo D&D’s MMO, Neverwinter (that’s what the Frost Maiden, pictured above, is promoting).

It was interesting to see numerous vendors in the exhibitor hall selling copies of the new 5th edition Player’s Handbook and that product was probably at the top of a lot of folk’s list of ‘must-haves’. For yours truly, the glimpses and rumors of the Monster’s Manual at the show was the real story though. Not only did the folks who dished out the cash for All Access tickets (retailing at $150 per player) receive a free copy of the coveted tome, there were also a few special giveaways over the weekend. 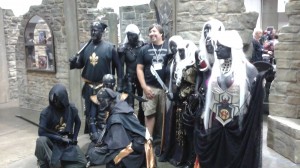 Salvatore and the fruits of his inspiring words

Organized play was in full effect. The newly minted Adventurer’s League , the direct successor of the Living Campaigns (Greyhawk, Force, Forgotten Realms, etc), was hitting on all cylinders. The folks from Bladman Games who organized it did a fantastic job in what was a very chaotic situation. I very much appreciated that one of the questions on the sheet handed out at the end of each game asked if the mustering experience was smooth and the staff courteous. Indeed, ‘customer satisfaction’ seemed to be high on the priority list. I had the pleasure of attending three D&D events. Two of the forthcoming D&D Expedition adventures and the massive D&D Epic: Corruption in Kryptgarden.

700 players showed up for a truly grand multi-table event. I truly felt like all the characters at all the tables were part of one huge encounter. This sense was very much conveyed by the constant flow of information from D&D HQ where announcements were made over a speakers regarding in game events such as ‘the Necromancers are dead!’ or ‘the siege weapons have been disabled’. All of this information came directly from the participating tables and was reported by event coordinators who were charged with a number of tables each.

As the players completed or failed at certain tasks, those results were reported quickly to HQ by the event coordinators. My table definitely had the feeling we were helping out all the other tables through our successful efforts. Seriously, there is something awesome about an announcement being made from HQ and all the tables cheering (or groaning) at the news. Big ups to my specific party, Dopplebock & Co, for ensuring protection against dragon breath for all! I also want to specifically thank Matthias Schäfer for being one of the best DMs I’ve had the pleasure to game with.

Speaking of DMs, as you can all probably guess, I’ve got opinions. In the three games I experienced at Gen Con the DMs ran the gamut from top notch to average to just horrible. Again, I was so thankful for the feedback sheets provided at the end of every game so I could rate the DM. I really hope this data is collected and put to good use by Baldman Games for next year’s convention. 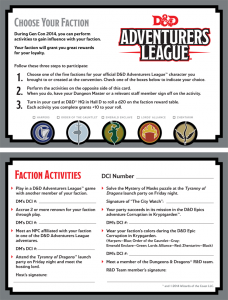 One interesting aspect of the entire Con weekend was the Faction Activities card handed out to everyone who participated in organized play D&D events. Part scavenger hunt and part incentive to play more D&D, the Faction Activity card was a lot of fun. Unfortunately for me, the end result was a bit of a let down. I had thought I might garner some ‘suh-wheeeat schwag’ but that was not to be. Instead participants rolled on a random treasure table for an in-game item to be used in the Adventurer’s League. It was still a pretty okay deal for me, since I’m obviously going to be playing more Expeditions. However for others folks who won’t be, maybe not so much? The best treat of the Con though was being able to speak with members of the creative and design teams that came up with D&D 5e, as well as with other WotC employees. I was happy to provide a few hearty congratulations and thank yous to such luminaries as Jeremy Crawford (Lead Designer who had this snazzy vest I immediately coveted), Rodney Thompson (Designer and all around nice guy), Chris Tulach (D&D Organized Play Manager and man of the people), Chris Lindsay (Assistant Brand Manager who signed my activity card, thanks Chris!), and of course the well known Mike Mearls (yes that’s us in the photo, don’t judge!).

Indianapolis itself was just a ball. We hit up a good amount of bars and restaurants in the area. There were also lots of food trucks parked outside the convention hall, including a craft beer truck, which made popping in and out of the convention center very easy. Everyone I met was friendly and the service was overall pretty great. I was surprised at how accessible the city was and at how massive Lucas Oil Stadium is! Thanks, Indy & Gen Con! Hope to see you next year! This was our nightly home base. Photo credit Russ Bomhoff.