– RPG area much much bigger
Yes, you may have seen photos; but this area has grown since last year and I hope it will continue to. It was truly epic to see thousands of table top gamers getting down.

– Mearls: Bard to come in next packet, DMG will be a ‘Tome’
I had a chance to rap with Mike Mearls about the current packet, mass combat rules in the future, how they’re thinking the DMG will be produced (currently 350+ page monster), and (of course) when I can playtest a Bard. – Fate of the Norns: Ragnarok – Fafnir’s Treasure
This game is the only one I bought while at PAX East. I demo’d it first and fell in love. It employs a game system that uses Runes instead of Dice.
Check out the PA Review

– Expo Hall doable in short bursts
Honestly, I go for the TT gaming, however the Expo Hall had some cool stuff. The Plants vs. Zombie winter hats were QUALITY. Lines were nuts for Elder Scrolls MMO, Neverwinter MMO (for which I heard the Rogue is boss), and for Assassin’s Creed Black Flag.

– D&D Arcade Games for XBLA
YES! In case you hadn’t heard, Shadow over Mystara and Tower of Doom are coming to XBLA (and PSN as well I think, but don’t pay attention to that stuff) in June 2013 as reported at the Capcom booth.

– Secret Ponchos
I enjoyed demoing this game, it’s a multiplayer battle royal ala League of Legends.

yup, this was basically it

– Pinny Arcade
This was fun. Sets of PA Pins (either a core set or a Pax East 2013 only set) were for sale to facilitate trading. I also brought my own pins with me. I kinda like the idea of trying to trade a Pin for a Motorcycle for a House for a Spaceship, etc… It’s just fun to haggle with people AND it’s a GREAT ice breaker when in line or whatever. My favorite trade was with a young gamer named Zoe; she had made her own pins at home and then brought them; they were big and colorful. I think they were Pokemon Inspired. Apparently there were secret specialty pins as well; both Mike and Jerry had special Gabe and Tycho pins they would trade to people, if approached (I got them in the signing line) as well as the WotC booth having one, and Scott Kurtz had a great Val Pin to promote his new Table Titans webcomic (which is pretty cool). 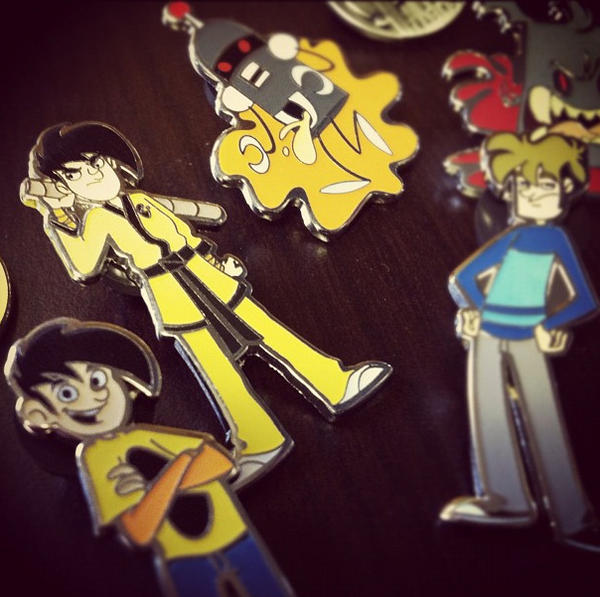