This year was perhaps my favorite PAX East so far. In full disclosure, I was working at the Twenty Sided Store’s D&D Booth this time around and so was livin’ la vida exhibitor. As such, this recap is more a personal response than a full-blown review since I did not get to attend any panels or have much free time to check out “all the things.”

Luckily, the main aspect of my booth duties was to interact with my fellow Expo-goers and so I felt like I got a good dose of what PAX East is all about: Community, Gaming, Humor, Positivity and Fun. The Table Top Area grew again this year, even with the inclusion of the LAN Area. I’m so glad that board games, card games, and TRPGs are making such a comeback! 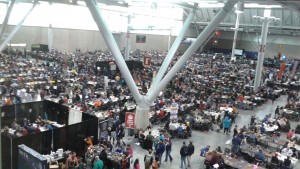 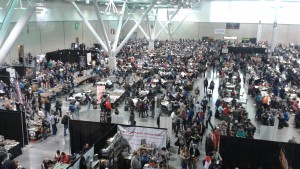 One of the highlights of my PAX experience, every year, is catching up with Zoe. I have written about her before, but for the uninitiated, she is a young person I randomly met a few years ago, who creates fun pins specifically for PAX East weekend. Her skills have grown with each year and this year’s offering was pretty sweet. Check out these great creations! 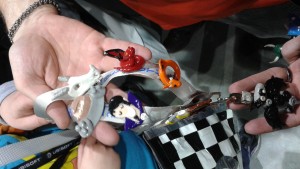 Working the booth was truly amazing though. We were running D&D 5E for the entire weekend and had 17 two-hour sessions, 20+ DMs, and 500+ players come through the booth. The funny thing was though, it wasn’t chaotic in the least. The particulars are discussed in a great Master Dungeon Master article over on the Adventurer’s League site. 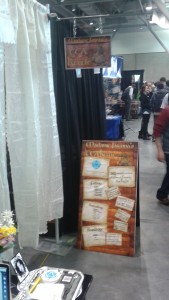 Suffice to say, the love of D&D is alive and well. So many folks who had never tried D&D or 5E came through the booth and it was just great to see everyone leave with a big smile on their face. The DMs who ran the tables really knocked it out of the park. I also was able to try a pair of video games: Behemoth’s Game 4 (a working title) and Thunder Lotus Games’ Jotun Game 4 (a working title) is a turn based tactical combat game, much like XCOM: Enemy Unknown or the Fire Emblem series. However, with the addition of Behemoth’s legendary humor, distinctive art style, and just plain ‘out there’ concepts the experience was an enjoyable one. The demo was about a half hour experience and took one through the beginning of the game, though the world hinted at was quite expansive. One of my favorite parts may have been the narrator’s voice, who seemed to be the antagonist in the story. 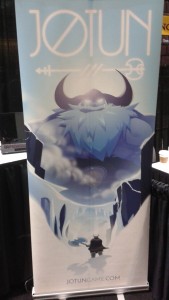 Jotun was a nice surprise I discovered amongst the Indie Dev booths. Inspired by the 2D style of the original Legend of Zelda and the gigantic enemies of Shadow of the Colossus, the art was just beautiful. The demo had apparently been hand drawn and then digitized, similar to what was going on in The Banner Saga. The demo I played was a lot of fun with combo attacks using a two handed axe, a gender-neutral hero, and an outsized Frost Giant boss that was a really hard opponent to beat.

During my free time, when not engaged in playing a game, I roamed the show floors as much as I could and one observation / realization that I had was that streaming, nee broadcasting, gaming events (with commentary) is becoming more and more ubiquitous. Even in the Table Top area there was a booth that was mic’d up and had camera feeds going as commentators provided opinions on moves players were making on this large board of tiles with minis and dice, etc.

It is wildly invigorating to realize that what AcqInc represents in terms of carrying forward a legacy of live entertainment is powerful, especially as it surrounds a hobby I love and have invested so much of myself in.

Applying this to my own love of Table Top RPGs, I realized that the Acquisitions Incorporated podcasts have spawned a host of other ‘fan created’ podcasts where folks play D&D (or whatever) and other folks happily listen and watch.

I know that isn’t a revelation or anything, however I do see a parallel with the AcqInc video podcasts and eSports or tSports (TableTop Sports, a term I’ve just coined. That’s right you read it here first).

The AcqInc podcasts have had an unintended effect of creating a niche genre that is only growing. That creative part of gaming subculture is directly tied to expanding the hobby, though whether specific podcasts are positive representations of our subculture is of course up for debate.

My main thought is, Wizards of the Coast and Penny Arcade collaborating on the AcqInc podcasts has had a large influence on a new method by which to introduce folks to D&D and while I wouldn’t posit it is the only influence on this new method, it definitely has set the ‘gold’ standard in many people’s minds.

We can even see this as WotC is putting out their own D&D Livestream Games.

That, for me, is definitely giving back to an experience / hobby / community in a loving way that has the ability to nurture / reinforce / expand the subculture in a progressive way.

So yeah, a big thumbs up on the proliferation of streaming games.

Yes, I was lucky enough to see the Acquisitions Incorporated game front and center this year and I realized again that WotC is literally (and I don’t use that word lightly) introducing Forgotten Realms CANNON via these live audience mediated experiences.

For someone invested in Realms Lore and being ‘up on’ the ongoing story, this year’s AcqInc show could only have caused tons of giddiness. From Minsc of Baldur’s Gate yelling signature catch phrases as he ran into battle alongside the AcqInc crew to the Tiefling villain, Vanifer, who will obviously be a main antagonist in the Elemental Evil adventure, Princes of the Apocalypse, this year’s show was just fabulous. Which is the most dangerous?!

Here’s looking forward to next year!